BAC Journal > BAC Executive Council: “Growing Our Union” Must Be the Highest Priority

BAC Executive Council: “Growing Our Union” Must Be the Highest Priority

Growing our Union was the theme of the BAC Executive Council’s March meeting in San Diego, CA. To achieve that goal, “we must organize and grow dramatically – in hours, in members, and in the scope of the work performed by our Union,” BAC President James Boland told the Executive Council on the first day of the meeting. “We’re going to rededicate ourselves to organizing for real growth. We’re going to diversify the work we organize, and we’re going to adapt to tomorrow’s construction industry. We’re going to establish member-based organizing committees in each of our Locals, and the IU will back you every step of the way.” The BAC Executive Council welcomed a line of inspiring guest speakers – Donna Brazile, Former Interim Director of the Democratic National Committee; David Cooper, Senior Economic Analyst at the Economic Policy Institute; Dr. Eden King, Associate Professor of Psychology at George Mason University; Evan Wolfson, President and Founder of Freedom to Marry; and Sean Hinga, Program Director of the State Innovation Exchange. 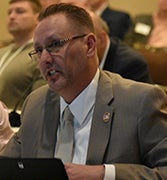