Our work with ICE and IMI through our Masonry r2p Partnership (www.masonryr2ppartnership.org) is having a positive impact on members’ safety and health, according to a membership survey conducted earlier this year. The survey asked a series of questions to track the Partnership’s progress in addressing members’ safety and health priorities identified in 2011, and solicited input on the safety and health concerns of greatest importance to members today. This study includes a comparison of the current survey results with those from the 2014 and 2011 surveys. The study shows steady progress, with more members aware of hazards, being provided with and using safer equipment and work practices than six years ago when the partnership started its work (http://www.bacweb.org/journal/2015_02/safety1.php). The most recent survey results show that our industry is growing, with an increase in jobs, lowers unemployment, and an uptick in young workers entering the trades. 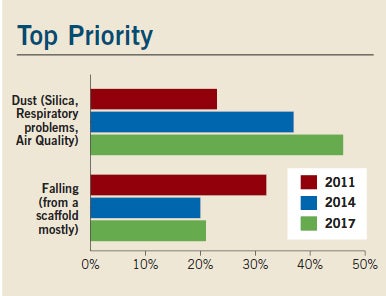 When members in this survey were asked, which hazards are of most concern, responses were consistent with past years. Dust/silica and falling remained on top,  however, they have switched places, with 46% of the members surveyed identifying dust as their top priority compared to 23% back in 2011.

The new OSHA Silica Standard scheduled to go into effect in September is making a difference, and so are our efforts to educate members and signatory contractors about the hazard, and ways to reduce or eliminate the risk for breathing in silica dust. 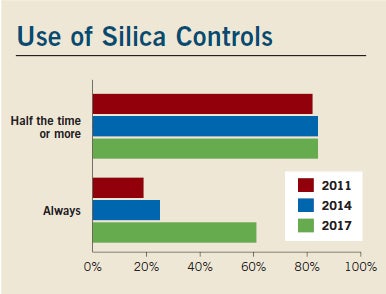 Another priority area that has seen improvement is hand safety. There has been significant growth in awareness of the need for hand protection and the use of gloves rose from 35% saying they “always” wear gloves in 2011 to 66% in this survey.

When asked why they do or do not wear gloves to protect their hands:

Hearing loss is a major issue for construction workers across the trades. With input from our trainers and hundreds of our members who participated in a CPWR-sponsored national survey on noise, CPWR is developing new training materials to raise awareness of the risk and prevent hearing loss. This effort has contributed to steady growth in awareness of the need for and use of hearing protection. In 2011, 30% of members reported using hearing protection “always.” This climbed to 51% with this survey.

Interestingly, fewer members are saying gloves and hearing protection are “uncomfortable to wear” today than in earlier surveys:

Our union and contractors are the primary sources of health and safety information for members.   When members were asked to identify the last place they had heard about safety, health, or PPE, 48% of members said at work, 20% said through the Union publications (e.g. the BAC Journal), 23% said at an OSHA class, and 6% said during apprentice training. Other sources included a Safety Council or a tool sales representative (2%), or OSHA’s website (1%).
To respond to members’ preferences for receiving information, they were also asked to identify the best methods of providing this type of information:

Overall, the information and materials developed and shared by the Partnership since it was established in 2011 are increasing awareness and use of safer work practices. BAC, IMI and ICE continue to work together through the Partnership to address priority safety areas going forward. They also support several research projects on construction safety and health, addressing issues related to ergonomics, mast climbers, dust generated during tuckpointing, and RF radiation exposure. Stay tuned on these topics and new information in future issues of the BAC Journal.