Unions are under harsh attack at both the federal and state levels. At the federal level, U.S. Representatives Joe Wilson (R-SC) and Steve King (R-IA) introduced the so-called “National Right to Work Act” in the 115th Congress on February 1st. The bill would prohibit workers from being required to join a union while still enjoying the benefits of representation. If enacted, the legislation would make the so-called Right-to-Work law a national standard and would be a major challenge to organized labor.

At the state level, in the few months since November’s election, two states – Missouri and Kentucky – have already enacted the so-called Right-to-Work laws, bringing the number of Free Rider states to 28. 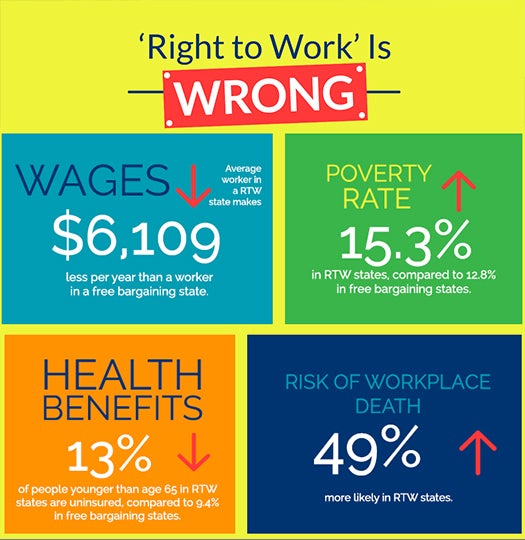 In New Hampshire, the working people won a major victory in February when the state House of Representatives rejected the so-called Right-to-Work bill that was supported by Republican Governor Chris Sununu. Thanks to organized labor, including members of BAC Local 3 Massachusetts/Maine/New Hampshire/Rhode Island, the House defeated the bill by a 200-177 vote, as 32 of the 223 state House Republicans sided with 168 House Democrats to vote down the measure that would weaken unions and hurt workers.

Despite its misleading name, the “Right-to-Work” law does not provide any guarantee of employment for people ready and willing to go to work. Rather, by undermining labor unions’ collective bargaining power, it weakens workplace protections and drives down wages and benefits for all workers. Unions are required to fairly represent all workers in a bargaining unit. Righ-to-Work laws allow free riders to refuse to pay their fair share for that representation. Studies of Economic Research Institute show that the law does not have any positive impact on job growth.