BAC Journal > Investing in Our School Facilities = Investing Our Future

Investing in Our School Facilities = Investing Our Future

Congress is considering legislation to invest in our nation's school infrastructure. Bills have been introduced in the House and the Senate to address this growing need. H.R.2475, Rebuild America's School Act of 2017, was introduced by U.S. Representative Robert C. Bobby Scott (D-VA). The bill has 113 cosponsors as this Journal goes to print. A companion bill,  S. 1674, School Improvement Act of 2017, was introduced in the Senate by Senator Jack Reed (D-RI). These bills provide for over $100 billion in federal grants and school construction bonds to help build and renovate schools. If enacted, the bill is estimated to create 1.8 million jobs, and many of those jobs will go to BAC members. 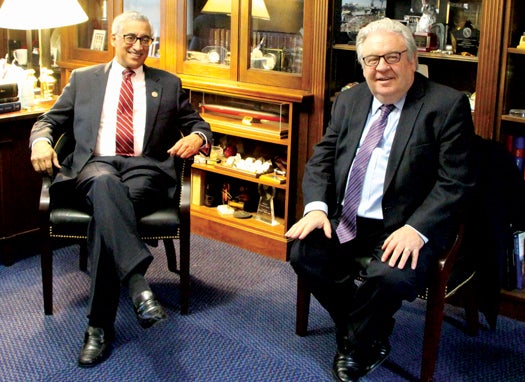 BAC is making efforts to gain more support for this legislation. Recently BAC worked with the sponsors to get signatures from Members of Congress on letters to President Trump urging him to include school construction in any comprehensive infrastructure proposal. The letters were sent on January 17th with 154 signatures of Members of Congress and 25 signatures of Senators. Significantly, the Senate letter included the signature of Senator Lisa Murkowski (R-AK), making it a bipartisan effort.

School facilities represent the second largest sector of public infrastructure spending after highways. According to the State of Our Schools report, school districts should be spending at least $77 billion per year to ensure healthy, safe, and efficient facilities and an additional $10 billion a year to meet 80% of the projected enrollment growth.

Traditionally, school construction is funded by local governments through property taxes and bonding authority. Certain state governments also provide funding, but the amounts vary widely. Right now, the need to invest in our schools is more urgent than ever. The 2016 State of Our Schools Report concluded that we underfund capital investments in our school buildings by $38 billion a year. On November 9, 2016, at a victory rally in New York City, President Trump said, "We are going to fix our inner cities and rebuild our highways, bridges, tunnels, airports, schools, hospitals … and we will put millions of our people to work as we rebuild it." Now it is the time to act. 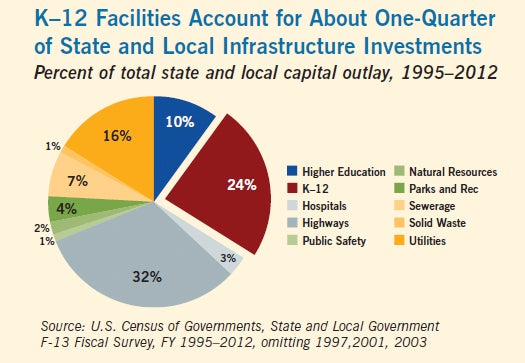